As some of you know, several months ago I applied for a position as a sports analytics specialist (amazing job description, and it even pays money).  The evaluation process has been wild, including *8* rounds of assessments and interviews. I feel like I’ve made my case as about as well as I can, though from what I understand the competition is something fierce — so it could easily go either way.  With a final outcome being (or at least seeming) imminent for quite a while now, I have held off on posting new material.  In truth, this hiatus has been much longer than I expected, so my apologies to Dennis Rodman.

If I get the job, it is not clear what will happen to the blog, as I haven’t yet discussed it with my potential employers.  But if I don’t get the job, I’m happy to report that the blog will proceed with my full commitment as well as my full-time attention.  Specifically — as insisted by my wife – that means no fewer than 40 hours of work and 5 posts per week.

Out of fairness to my loyal reader(s), no matter what happens I will be publishing the remainder of the Rodman series, as well as my long-promised (and recently-revamped) Tennis Service Aggression Calculator, and any necessary follow-ups to other items, such as the following:

During the last NHL season, I noted that Alexander Ovechkin and Sidney Crosby had thus-far failed to break Wayne Gretzky’s single-season point-scoring record from 1984, combined.  But I guess records are meant to be broken!  With 109 each, AO and SC’s 218 points in the 09-10 season just edges Gretzky’s 215.  Congrats, new guys!

Tiger has truly had a terrible year — on the golf course. I’ve updated this older graph to include the full season of data, though the upshot is basically the same: 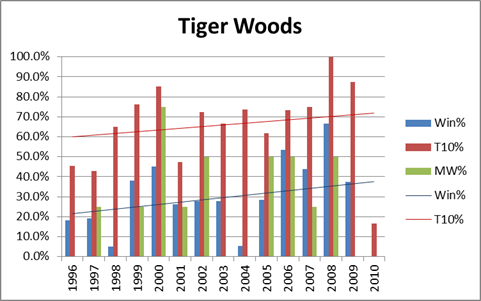 Much has been made of Tiger losing his #1 overall ranking to Lee Westwood, but the situation is actually much more dire: If Tiger continues to play this poorly, he could be in danger of losing his status as an above average PGA golfer.  Take a look at this summary of stats from his 2010 PGA season (from the PGA website): 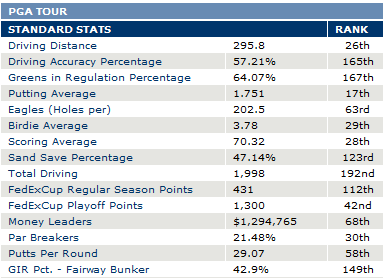 Eliminating FedEx Cup Points and earnings from the list, he still averaged right around 87th for these measures (there are about 190 PGA regulars).  His adjusted scoring average ranks 28th, which would itself be unthinkable for Tiger, but even 28th may be generous: the weighted figure is bolstered by relatively good showings in strong fields at the Masters and U.S. Open, but Tiger actually performed worse in weaker fields.  Let’s quickly look at his unadjusted scoring (same source):

Tiger typically plays a tougher schedule than your average golfer, for sure, but that hasn’t stopped him in the past:  he led the PGA in both adjusted AND unadjusted scoring average each of the past 5 seasons.

The Rams are Definitely Regressing:

The St. Louis Rams are currently 6-6, which, oddly enough, puts them right about on track for 1-15 teams historically: 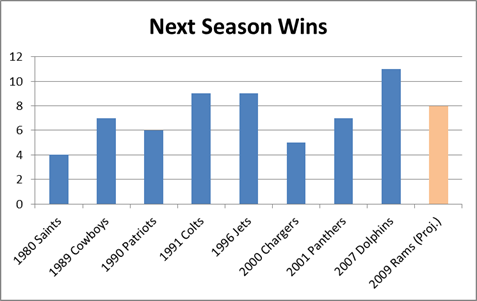 (So maybe my hypothesis has some teeth to it after all.)

Relatedly, so far this has been a hallmark year for regression to the mean.  Here is a scatterplot of 2010 wins by 2009 wins (functionally equivalent to the bubble charts in the Rams post): 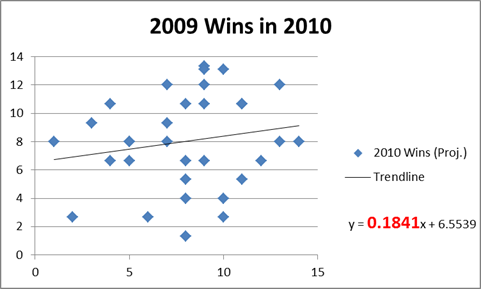 That .18 coefficient is very low, even by recent standards.  The coefficient for he equivalent trendline for season to season wins since the implementation of the salary cap in 1993 is .30.

Randy Moss is having a nightmare year.  Granted, he has had to play for 3 different teams and 5 different starting quarterbacks, but there is no evidence of him having his usual impact – either directly or indirectly.  The good news is that he won’t reach 9 games with a single quarterback, and thus won’t spoil his nifty “WOWY” graphs.  The bad news is that the Pats, Vikes, and Titans all have worse records with him in the line-up than without him.

At mid-season, ESPN Stats & Info applied a methodology similar to mine, and things didn’t look so bad.  But Brady’s recent hot streak has mostly killed the disparity:

(Recall that even Favre’s 12 point difference in QB Rating is low by Moss’s standards).

Finally, I’ve been tracking the performance of my neural network’s predictions vs. Football Outsiders’ DVOA Projections and Advanced NFL Stats’ Koko model (Recall that in recent years, F.O. has performed the worst).  Since the original metric I was using for comparison was correlation, which is sensitive to the number of games played, I can’t really do a precise analysis until the season is over.  But suffice it to say:  Football Outsiders has struck back — with a vengeance — and has a seemingly insurmountable lead going into the back stretch.  On the other side, Koko is getting demolished.  Since Koko is entirely based on the previous season’s win total, its poor performance is somewhat unsurprising considering the regression graph above (which, incidentally, Koko is not doing much better than).  My neural network, meanwhile, is plugging along just slightly below its previous averages.

Giving credit where it’s due, this range of performance actually makes the F.O. predictions that much more impressive: normally, the previous season is either predictive or it’s not, and the models’ performances tend to move together.  My speculation would be that perhaps the many exogenous variables that F.O. uses and the other models don’t are particularly important this year.

One Response to “News and Updates”