Any thoughts on the Lions kicking a 32-yard FG in overtime from the left hash on first down?

I’ve thought about this situation a bit, and I don’t hate it.  Let me pull up this old graph: 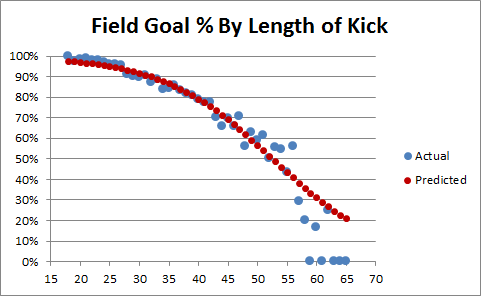 So a kneel in the center is maybe slightly better: generically, they lose a percentage or two, but I’m pretty sure that even from that distance you lose a percentage or two for being on the hash.  Kickers are good enough at that length that going for extra yards or a TD isn’t really worth it, plus you’re not DOA even if you miss (while you might be if you turn the ball over).

Also from that post where the graph came from, the “OT Choke Factor” for kicks of that length is negligible.

Question re: field goals — What percentage are you looking for your kicker to have at the longest range you are willing to regularly (i.e. throughout the game) use him?

I’ll use a static example: if your kicker was a known 50% from 52 yards, would you regularly take that over a punt? What about 40%, etc. Then make it dynamic, where the kicker has some shrinking probability as he moves back, and the coach has a decision about whether to kick/punt from a given distance. At what maximum distance/percentage do you regularly kick, rather than regularly punt.

This is a good question and topic, but it’s extremely hard to generalize. It depends on your game situation and what your alternatives are. Long kicks, for example, are generally bad—even with a relatively good long-range kicker.  But in late-game or late-half scenarios, clearly being able to take long kicks can be very valuable.

It is demonstrable, however, that NFL kickers have gotten incredibly good compared to past kickers.  Aside from end-game scenarios, kicking FG’s used to be almost universally dominated by going for it (or sometimes punting). But since kickers have become so accurate, the balance has gotten more delicate.

Also [sort of contra Brian Burke, I’m thinking of a link but can’t find it], I think individual team considerations are a much bigger factor in these decisions than just raw WPA.  It depends a lot on how good your offense is, how good it is at converting particular distances, how good your defense is, etc.  While the percentage differences may be fairly small for the instant decision, they pile up on each other in these types of multi-pronged calculations.

[In the later game] Chris Collinsworth said kickers prefer being on the left hash (though the justification was kind of weak). [Obv this would make the 1st down kick even better.]

On Detroit and Buffalo’s Chances:

Detroit is currently 3-0 and leading the league in Point Differential at +55, and unlikely to be passed by anyone any time soon [by which I mean, this weekend]. 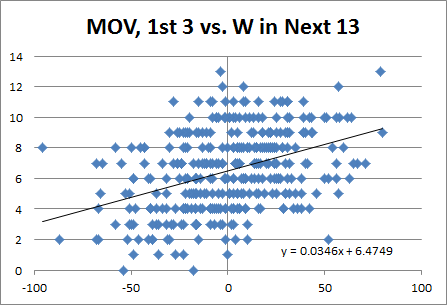 Yes, this can be calculated more precisely, but it will be around 11 games regardless.

Not bad.  Only Miami missed the playoffs, and they were in a 3 way tie atop AFC East at 9-7.

Q: The Bills for real? What do they project to over a season?

Um, I don’t know.  Generically, being 3-0 and +40 projects to 10 or 11 wins, but there’s a lot of variance in there.  The previous season’s results are still fairly significant, as are the million other things most fans could tick off.  Another statistically significant factor that most people prob wouldn’t think of is preseason results.  The Bills scored 24 and 35 points in games 2 and 3 of the preseason.  There’s a ton of work behind this result, but basically I’ve found that points scored plus points scored in games 2 and 3 of the preseason (counting backwards) is approximately as predictive as points scored minus points allowed in one game from the regular season.  So, loosely speaking, in this case, you might say that the Bills are more like a 4-0 team, with the extra game worth of data being the equivalent of a fairly quality win over a Denver/Jacksonville Hybrid.

I’d also note that it’s difficult to take strength of schedule into account at this point, at least in a quantitative way.  You can make projections about the quality of a team’s opponents, but the error in those projections are so large at this point that they add more variance to your target team’s projections than they are worth.  Or, maybe a simpler way to put it: it’s hard enough to adjust for quality of opponent when you *know* how good they were, and we don’t even know, we just have educated guesses.  (Even at the END of the season, I think a lot of ranking models and such don’t sufficiently account for the variance in SoS: that is, when a team beats x number of teams with good records, they can do very well in those rankings, even though some of the teams they beat overperfomed in their other games.  In fact, given regression to the mean, this will almost always be the case.  Of course, a clever enough model should account for this uncertainty.)