If you’re a hardcore follower of this blog, you know that one of things I have frequently complained about is the failure of NBA play-by-play data to include the shot clock. It’s so obviously important and—relative to other play-by-play data—so easy to track, that it’s a complete mystery to me why doing so isn’t completely standard. OTOH, I see stats broken down by “early” and “late” in the shot clock all the time, so someone must have this information.

In the meantime, I went through the 2010 play-by-play dataset and kluged a proxy stat from the actual clock, reflecting the number of seconds passed since a team took possession. Here’s a chart summarizing the number and outcomes of possessions of various lengths: 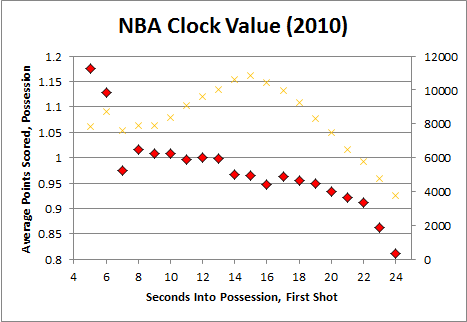 We should expect there to be a constant trade-off at any given time between taking a shot “now” and waiting for a better one to open up: the deeper you get into a possession, the more your shot standards should drop. And, indeed, this is reflected in the graph by the downward-sloping curve.

For now, I’m just throwing this out there. Though it represents a very basic idea, it is difficult to overstate its importance:

With better data, the possibilities would open up further (even moreso when combined with other play-by-play information, like shot type, position, defense, etc). For example, you could look at the curve for individual players and impute whether they should be more or less aggressive with their shot selection.

So, yeah, if any of you can direct me to a dataset that has what I want, please let me know.

5 Responses to “The Clock: A Graph and Some Thoughts”