The Kansas City Chiefs beat Buffalo today to push their record to 9-0, with Alex Smith once again putting up numbers only his mother or Terry Bradshaw could love (too bad he doesn’t have Randy Moss). There has been a lot of grumbling about this Chiefs team, and for a serious-ish treatment see “The Worst 8-0 Team of All Time?” at Advanced NFL Stats.

However, their victory is perfectly consistent with the long and storied history of 8-0 teams, who have a 19-2 record in game 9 (through today). Indeed, of all “x-0” teams (where X is less than 15), 8-0 is the least likely to lose their next game: 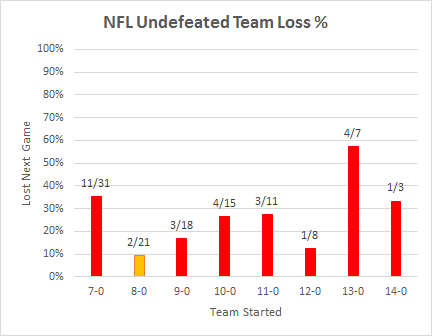 And if you counted all the remaining games of 15-0 teams, they would still only be 5-1 (the ’72 Dolphins went undefeated, and the 2007 Patriots won 3 more before losing the Super Bowl).

What does this mean? Probably not that much, though late regular-season NFL gets wacky for a number of reasons (injuries, strategic incentives, motivational changes, etc), so it’s unsurprising to me that the “drop rate” increases even as the teams should theoretically be getting stronger.

In bad news for the Chiefs, however, their odds of winning the Super Bowl decreased slightly: while 40% of 8-0 teams had gone on to a championship, only 39% of 9-0 teams have done the same (classic DUCY).

3 Responses to “Graph of the Day: When Do Undefeated Teams Lose?”