First of all, congrats to Dennis for his well-deserved selection as a 2011 Hall of Fame inductee—of course, I take full credit.  But seriously, when the finalists were announced, I immediately suspected that he would make the cut, mostly for two reasons:

Congrats also to Artis Gilmore and Arvydas Sabonis.  In my historical research, Gilmore’s name has repeatedly popped up as an excellent player, both by conventional measures (11-time All-Star, 1xABA Champion, 1xABA MVP, led league in FG% 7 times), and advanced statistical ones (NBA career leader in True Shooting %, ABA career leader in Win Shares and Win Shares/48, and a great all-around rebounder).  It was actually only a few months ago that I first discovered—to my shock—that he was NOT in the Hall [Note to self: cancel plans for “The Case for Artis Gilmore”].  Sabonis was an excellent international player with a 20+ year career that included leading the U.S.S.R. to an Olympic gold medal and winning 8 European POY awards.  I remember following him closely when he finally came to the NBA, and during his too-brief stint, he was one of the great per-minute contributors in the league (though obviously I’m not a fan of the stat, his PER over his first 5 season—which were from age 31-35—was 21.7, which would place him around 30th in NBA history).  Though his sample size was too small to qualify for my study, his adjusted win percentage differential over his NBA career was a very respectable 9.95%, despite only averaging 24 minutes per game.

I was hesitant to publish Part 4 of this series before knowing whether Rodman made the Hall or not, as obviously the results shape the appropriate scope for my final arguments. So by necessity, this section has changed dramatically from what I initially intended.  But I am glad I waited, as this gives me the opportunity to push the envelope of the analysis a little bit:  Rather than simply wrapping up the argument for Rodman’s Hall-of-Fame candidacy, I’m going to consider some more ambitious ideas.  Specifically, I will articulate two plausible arguments that Rodman may have been even more valuable than my analysis so far has suggested.  The first of these is below, and the second—which is the most ambitious, and possibly the most shocking—will be published Monday morning in the final post of this series.

I am aware that I’ve picked up a few readers since joining “the world’s finest quantitative analysts of basketball” in ESPN’s TrueHoop Stat Geek Smackdown.  If you’re new, the main things you need to know about this series are that it’s 1) extremely long (sprawling over 13 sections in 4 parts, plus a Graph of the Day), 2) ridiculously (almost comically) detailed, and 3) only partly about Dennis Rodman.  It’s also a convenient vehicle for me to present some of my original research and criticism about basketball analysis.

Obviously, the series includes a lot of superficially complicated statistics, though if you’re willing to plow through it all, I try to highlight the upshots as much as possible.  But there is a lot going on, so to help new and old readers alike, I have a newly-updated “Rodman Series Guide,” which includes a broken down list of articles, a sampling of some of the most important graphs and visuals, and as of now, a giant new table summarizing the entire series by post, including the main points on both sides of the analysis.  It’s too long to embed here, but it looks kind of like this: 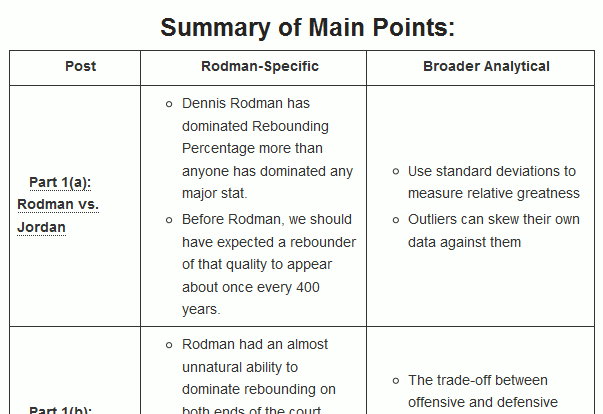 As I’ve said repeatedly, this blog isn’t just called “Skeptical” Sports because the name was available: When it comes to sports analysis—from the mundane to the cutting edge—I’m a skeptic.  People make interesting observations, perform detailed research, and make largely compelling arguments—which is all valuable.  The problems begin when then they start believing too strongly in their results: they defend and “develop” their ideas and positions with an air of certainty far beyond what is objectively, empirically, or logically justified.

With that said, and being completely honest, I think The Case For Dennis Rodman is practically overkill.  As a skeptic, I try to keep my ideas in their proper context: There are plausible hypotheses, speculative ideas, interim explanations requiring additional investigation, claims supported by varying degrees of analytical research, propositions that have been confirmed by multiple independent approaches, and the things I believe so thoroughly that I’m willing to write 13-part series’ to prove them.  That Rodman was a great rebounder, that he was an extremely valuable player, even that he was easily Hall-of-Fame caliber—these propositions all fall into that latter category: they require a certain amount of thoughtful digging, but beyond that they practically prove themselves.

Yet, surely, there must be a whole realm of informed analysis to be done that is probative and compelling but which might fall short of the rigorous standards of “true knowledge.”  As a skeptic, there are very few things I would bet my life on, but as a gambler—even a skeptical one—there are a much greater number of things I would bet my money on.  So as my final act in this production, I’d like to present a couple of interesting arguments for Rodman’s greatness that are both a bit more extreme and a bit more speculative than those that have come before.  Fortunately, I don’t think it makes them any less important, or any less captivating: